Some recipes we tried from around the web this week

This week I felt like I didn’t get nearly as much done as I had wanted to, cooking-wise. But I did try some pretty decent recipes.

I actually ended up making Pumpkin Pancakes from Diane Sanfilippo’s Practical Paleo cookbook a few times over the past week. They’re soooo good and not too complicated or time-consuming to whip up before work in the morning. Recipe is also shared on her website here. The recipe in the book calls for 2 tbsp maple syrup, but I reduced it to one and took her suggestion of serving it topped with banana slices. I’m planning to start the 21 Day Sugar Detox tomorrow, and I’m hoping to try this recipe with no added sweetener at all – pretty sure it’ll still be tasty.

As for delicious things that I will definitely not be eating on the sugar 21DSD, this carrot cake has been a recurring treat since I made it last weekend. I replaced the grapeseed oil with melted butter, which I’m pretty sure was for the best. The recipe is for a 9″ round layer cake, but I just treated the 2 layers as separate cakes, and cut each one into 8 wedges as soon as they were cooled, wrapping each slice individually for later snacking. On one occasion I went all-out and topped a couple of slices with the coconut cream frosting from Practical Paleo, which unfortunately is not available online (if you’re considering purchasing a paleo cookbook though, I definitely recommend checking this one out). 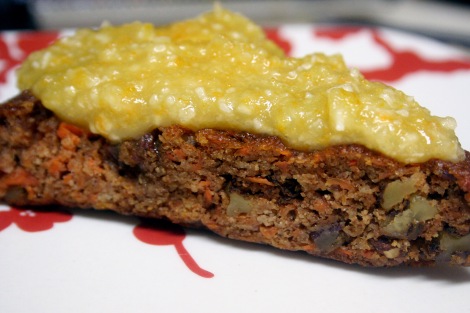 We were eating a lot of oranges the past week because Allan likes to use fruit as medicine (or just uses illness as an excuse to gorge on fruit, possibly) and he felt a cold coming on. I pulled some Serben Free Range chicken wings out of the freezer and used Health Bent’s Paleo Orange Chicken recipe to make a tasty wing sauce. To do up the recipe as wings, make the sauce as directed in the Health Bent recipe. Toss thawed chicken wings (about a pound) in melted coconut oil with salt and pepper. Set on a wire rack on top of a rimmed, foil-lined baking sheet and baking for 45 minutes, then toss the wings in the orange sauce and bake for another 5-10 minutes. These looked amazing right out of the oven but I actually just let them cool and popped them in the fridge for a bagged lunch the next day. They were still delicious reheated.

I also tried, for the second time now, this awesome recipe for Ultra-Crispy Slow-Roased Pork Shoulder. I slow-roasted it in the oven overnight, then stuck it in the fridge for the day while I was at work. In the evening, I took it to my parents’ place, cut it into 1″ cubes, and heated it back up in a hot skillet, letting more fat render out of the skin to brown and crisp up the tender little bits. Simple and delicious. Last time I made it, I took the recipe’s suggestion to pair it with this chimichurri, which I would’ve done again if I’d had parsley on hand.

Now to buckle down and plan another week’s meals…wish me luck!