Alright, I survived the horrible illness of the long weekend and made it through to day 1 of my Whole30. I’m pretty sniffly and disgusting but I feel way better today. I could even taste most of my food!

I’m going to log everything I eat here to keep me honest and hopefully help out other people trying to figure out what to eat. Excuse the crappy cell phone photos.

For breakfast I wanted to have zucchini fritters but the zucchini I bought over the weekend had somehow gone bad already. So bummed! Will have to investigate better zucchini storage methods in the future.

Anyway, breakfast is the WORST meal to try and improvise when you have to hurry up and get to work. So I threw some bacon in a pan so at least something was happening well I figured out my next move. I spooned some stored bacon fat into a second pan, let it get hot, and then decided I was going to make an omelette. After running around panicking about what to stuff it with for a bit while the eggs cooked up, I decided just in time to mash up an avocado and use that. Whew! Throw some raspberries on the plate and that’s breakfast. 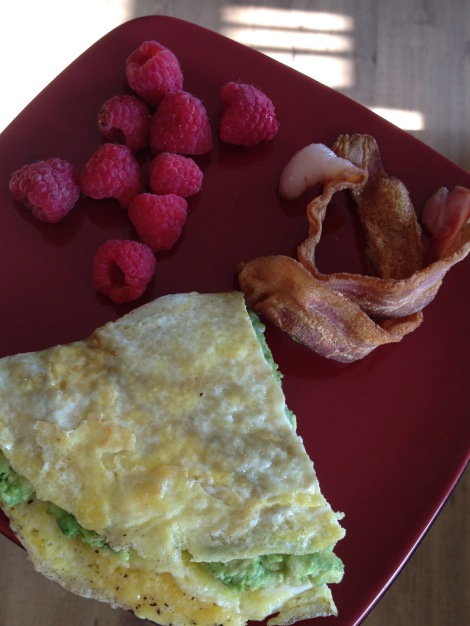 Because I was sick and miserable over the weekend I didn’t get around to preparing food ahead of time for lunches, so I had nothing to bring to work with me. There aren’t a lot of restaurants I can really eat at on a Whole30, so I went to Swiss Chalet. I ordered a quarter chicken (white meat, because it’s a bigger piece) with a Mediterranean salad with no feta or dressing. And I skipped the bun. Still a pretty decent amount of food, although a bit overly low calorie for me (even eating all the skin on the chicken, it came in less than 400 calories). I was pretty hungry by the end of the work day. 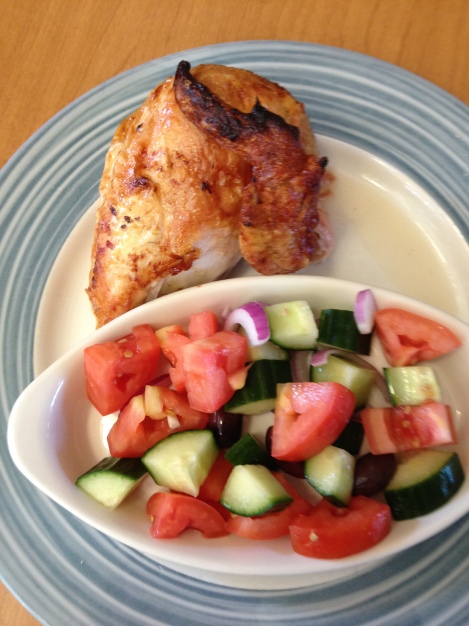 For dinner I had more time in theory but I was desperately hungry so I went for speed again. I had some frozen pork chops that I put in a bowl with hot tap water to thaw out quickly while I peeled and broke down a smallish butternut squash and preheated the barbecue. I put the squash on to boil and seasoned the pork chops with salt, pepper, paprika, garlic powder, and dried parsley, and threw them on the barbecue. I fried up 2 slices of bacon, then transferred the butternut squash chunks to the hot bacon fat to finish cooking, along with salt, pepper, sage, a bit of chili powder, and the chopped up bacon. For a second veggie (I try to have 2 different veggies sides with each meal, and this was the first meal today that I actually pulled it off) I sauteed up some multi-coloured string beans in coconut oil. It took maybe 30 minutes and turned out delicious – and I made enough for tomorrow’s lunch now, so no more complicated special orders at cheap chains for me! 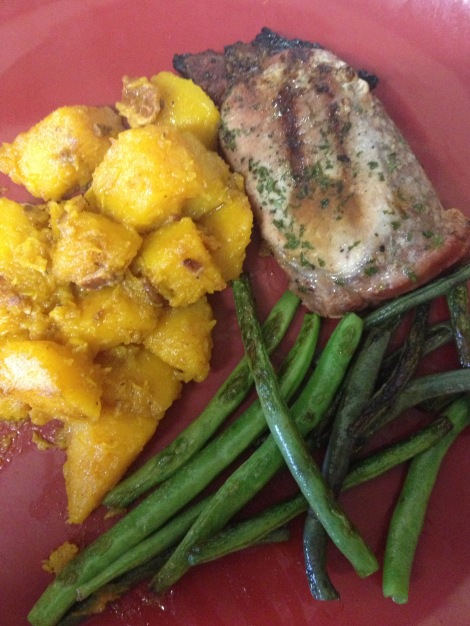